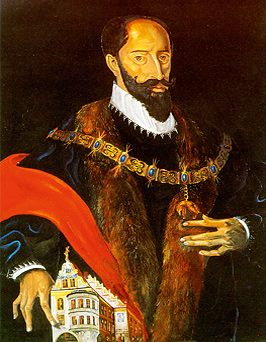 1589 – The founding of Hofbräuhaus

Wilhelm V, the Duke of Bavaria (1579-1597), had a thirsty and demanding household. They were dissatisfied with the beer brewed in Munich, and so beer had to be imported from the town of Einbeck in Lower Saxony. Wilhelm ordered his retinue to think of ways of reconciling cost and pleasure, and on September 27, 1589, his chamberlain and counsellors Ch. Strabl, A. Amasmeyr, S. Prew and G. Griesmair submitted a suggestion: why not build a brewery?

Wilhelm was delighted with the idea and on the very same day (!) recruited the brewmaster of Geisenfeld Monastery, Heimeran Pongraz, to plan and supervise the construction of Hofbräuhaus (the “ducal brewery”), and to be its first master brewer.

Wilhelm’s son and heir, Maximilian I, had a different taste in beer than his father before him. He was less of a fan of the dark and heavy “Braunbier” – the most popular juice of the barley at that period. And he was not just a gourmet, but also a shrewd strategist where financing and marketing were concerned. Without further ado, he forbade all other private breweries to brew Weissbier, thus creating a monopoly for himself and his ducal brewery.

That meant not only a handsome source of income for his court, but also 400 years of experience in Weissbier brewing for Hofbräu München, as the brewery is called today.

1607 – Change of address for the ducal brewery

Being successful isn’t always easy. Maximilian learned the truth of this when his Weissbier sold so well that the brewery was unable to brew fast enough to keep up with demand.

In 1605, the ducal brewery brewed a massive 117,424 gallons of beer – a veritable beer lake, a huge amount for that time. Maximilian decided to relocate the brewery and had a new one built on the Platzl (plaza), where the beerhall still stands today.

Of course, the new building had to be financed. Maximilian, with his keen financial sense, was aware of the potential that Weissbier offered and converted his people’s thirst into cash. In 1610, he legalised what was already common custom under the counter – he issued an edict allowing Munich’s tavern owners to buy beer from the ducal brewery and to serve it not only to members of the ducal household, but also to the “common folk”. That fired the starting shot for the triumphal march of the beers of Hofbräu München.

Heimeran Pongraz’ successor, Elias Pichler, was under pressure. The new brewery on the Platzl was complete, brewing was in progress, but the ducal court was complaining. In olden days, they lamented, there was always some of that good old strong beer from Einbeck to be had, but now – nothing but that locally brewed Braunbier and Weissbier. There had to be something stronger! Pichler experimented and in early 1614 produced the first beer in Munich brewed using the “Ainpockhisch” (Einbeck) method. This “Maibock” beer was to save the city of Munich.

When the Swedish army occupied the town in 1632 during the Thirty Years’ War, they only refrained from plundering and burning once they had been paid tribute of 344 pails of Maibock beer brewed in the Hofbräuhaus brewery.

Two years later, desirous of offering His Majesty a really special beverage, the royal brewers started to brew a beer specially for the festival with a deep golden colour, stronger original wort and higher alcoholic content – the world-famous “Oktoberfestbier” from Hofbräu München.

Hofbrauhaus Social DebutHofbräuhaus had made its debut in society.
When Munich’s private brewers and tavern-owners complained that many ordinary citizens would like to enjoy the beer from the royal brewery like the public employees, Ludwig I proved to be an out-and-out philanthropist. He issued a decree granting a license for the beer, as well as food, to be served publicly in the Hofbräuhaus – the Hofbräuhaus inn we know today was born.

Sixteen years later, on October 1, 1844, Ludwig gave further proof of his philanthropic attitude: he cut the price of a one-litre mug of Hofbräu beer from 6_ crowns to just 5 crowns so that, in Ludwig’s words, “the working class and soldiers could afford a healthy and inexpensive drink.”

HB LogoThe much-coveted, world-famous logo.
In the advertising world, plagiarism – stealing somebody else’s idea – is known as “inspiration”. And various other court breweries in Germany found “inspiration” in the highly characteristic mark of Munich’s Hofbräuhaus. To put an end to this, the brewery director, Johann Nepomuk Staubwasser, had the world-famous logo registered, first of all with the Munich District Court, and shortly after also with the Imperial Patents Office in Berlin, for use “solely by the Royal Hofbräuhaus Company in Munich”. The “wares (sic!) for which the sign is reserved”, said the letters patent, “[are] self-brewed beers in kegs or bottles”.

Hofbräuhaus after renovationHofbräuhaus after renovation, as it still looks today.
The rise in “tourism” brought an increasing flood of visitors to the city of Munich whose programme included a visit to Hofbräuhaus. Chemnitz-born architect Max Littmann was commissioned by the Royal Planning Department to convert the building on the Platzl into a modern eating house. Littmann’s father-in-law Jakob Heilmann, who owned a firm of building contractors, began demolition work on the old brewery on September 2, 1896, to build the taproom as we know it today, which was opened on February 9, 1897. On the same day, demolition work started on the office building, which was converted into a separate restaurant part. The newly renovated Hofbräuhaus was opened on September 22.

Even the most famous beer-house in the world was not spared the catastrophic events of the Second World War. In the night of April 25, 1944, Hofbräuhaus was hit by the first aerial bombs, and three further air attacks did more damage. When fighting finally came to an end on May 8, 1945, only a small part of the taproom in Hofbräuhaus was still in working order; all the other rooms had been destroyed.

In 1980, the Free State of Bavaria made plans to move the brewery to the outskirts of the city, and construction work began at a new location in the Munich suburb of Riem in September 1986. The new 76-million mark building was officially inaugurated on November 23, 1988. The brewery has its own well and excellent transport connections by rail and road and cutting-edge equipment. With a state-of-the-art equipment, designed for a production capacity of 6,603,000 gallons a year, the Hofbräuhaus brewery ranks among the most modern in Europe.

On 3 November 1997, a lavish celebration was held in downtown Munich to celebrate the one hundredth birthday of Hofbräuhaus as a restaurant in its current appearance. Hundreds of regular guests, drinking a specially brewed anniversary beer, raised their glasses to each other and to Hofbräuhaus – the most famous public house in the world!

With now six years since the beer was introduced in the United States, it was now time for a real Hofbräuhaus in the U.S. In the spring of 2003 a brewhaus and beer hall opens in the style of the Munich original in Newport, KY.